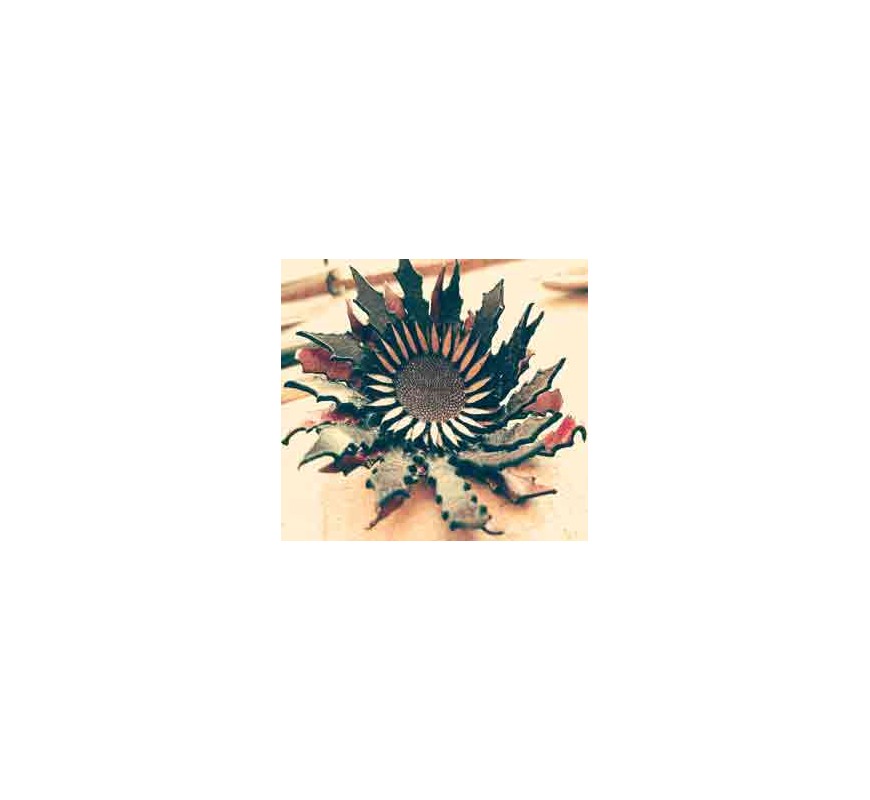 This is the story of how Amalur created the sun, the moon, and the "Eguzkilore" to protect humans from evil spirits, according to Basque mythology.

Legend has it that in the beginning of time, when men began to populate the earth, neither the sun nor the moon existed and men were immersed in great darkness, frightened by the numerous creatures that came out of the bowels of the earth: fire bulls, flying horses, huge dragons, geniuses and witches ... The men lived in caves, fearful and expectant, until finally, in desperation, they decided to ask Amalur for help. At the insistence of his prayers, Amalur said to them:

- “My children, you ask me to help you and I am going to do that. I will create a luminous being that you will call Ilargi. "

And so Amalur created the Moon, which with its pale brightness illuminated the night and scared off the creatures. At first, the men were frightened by the light and remained in their caves without daring to leave. But they saw the creatures of darkness flee from the glow of Ilargi, and they went out to celebrate, rejoicing. But the genius scare did not last forever, and little by little, the creatures of darkness became accustomed to the light of Ilargi, and they soon emerged from their chasms and harassed humans again. So the men came to Amalur again, this time asking him for something more powerful.

- "Amalur," they said, "we are very grateful to you because you have given us Mother Luna, but we still need something more powerful since the geniuses do not stop persecuting us."

- "Okay," - replied Amalur- "I will create an even more luminous being that you will call Eguzki."

And Amalur created the Sun. In this way, the Sun would be the day and the Moon the night. It was so big, bright and hot that even the men had to get used to it little by little. Thanks to its heat and light, the plants grew and even more importantly, the geniuses and witches could not get used to the great clarity of the day and since then they could only go out at night.

But the men came once more to Amalur to ask him for protection during the night, as the jinn continued to emerge from their chasms in the dead of night to harass them. And it was then that Amalur created a flower so beautiful that, seeing it, the beings of the night would believe that it was Eguzki himself and flee in terror. This is "Eguzkilore" (flower of the sun). And to this day, this is the symbol of protection that defends the homes of evil spirits, sorcerers, the geniuses of disease, storms, lightning and other enemies of man.

From that time until today, people continue to search the mountains for the sun flower to dry it and leave it hanging on the door of the house to protect it from evil spirits. Popular belief said that the sorginak (witches) and lamias could not enter houses until they had counted all the leaves on the plant, but were unable to do so before daybreak, having to return to their underground shelters. In other versions, the mere sight of the eguzkilore at the door, made them believe that it was the same sun and that the dawn was breaking, so they had to retreat to their caves.

The Eguzkilore is the flower of the wild thistle (Carlina Acaulis), a perennial plant with a stiff and reduced stem of up to about 20 cm. Tall. It grows almost close to the ground and sprouts in the form of a rosette of trimmed and thorny leaves. The floral head is located in the center of the rosette. It has the characteristic that it does not wilt, always maintaining its beauty and freshness. It grows on sunny slopes, fallows and stony mountain meadows.